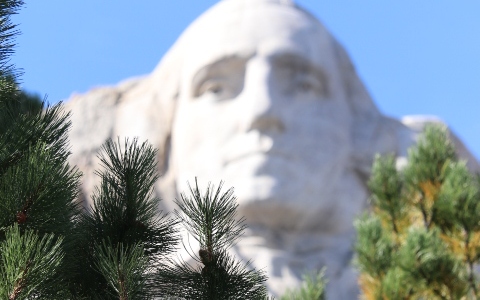 And he would know. I’m predisposed to quote John, as he is, according to the fun quiz I just took from Patriot Academy (go there, go there, homeschoolers!) the president I most resemble. You may be Tom’s or George’s twin (yes, I know that’s not John in the pic). Such fun.

“Arms in the hands of individual citizens may be used at individual discretion for the defense of the country, the overthrow of tyranny, or, in private self defense.” – John Adams

Yesterday my daughter and I went to Wyoming where there are fewer mask-querades than in Colorado, and while there joined a coffee shop meeting of Wyoming conservatives. These were fine folks, but there was no mention of God. These were, I thought beforehand, good, salty, no-nonsense Wyoming git-er-done types. Christians.

But, in fact, they are like so many of us, handicapped. In the parking lot I saw anti-Colorado bumper stickers. “Colorado is Wyoming’s Mexico” and a few other uncomplimentary offerings prepared me for the remarks of the man next to me. In a nutshell, he said, “We hate Colorado.”

There was a question about Mark Gaetz’s motives in coming to Wyoming’s “Impeach Liz Cheney” rally, as in, “Why did we get an outsider?” I thought we were all Americans. More division. How does the great evil of socialism win over freedom? With division.

(Socialist “intellectual” Bhaskar Sunkara praises Bernie Sanders and Jeremy Corbyn for promoting “a renewal of class antagonism” which is essential for the thriving of evil in society.)

Back to the meeting in Wyoming: One of the attendees belittled another conservative in attendance (better than behind his back, maybe?) in front of everyone; later the speaker said about Cheyenne (where we were), “I hate this city.” Could it be that in judging the bringers of division and crassness, we become divisive and crass? More divided?

I’m asking these questions in prayer this morning, along with the question, “What is the new song You want us to sing, Father?” I was reading and re-reading Psalm 96: “Sing unto the Lord a new song.” Certainly that precludes the same old, same old, melodies of anger and defensiveness. Of division.

“Father, You promise us wisdom for the asking, and I’m asking for wisdom. Surely there is no other source.”

Some things are so obvious we look right over them. We go to the TV for answers, and politcal gatherings for good company, and when it comes right down to it, if we’re not keeping company with Jesus, if we’re not doing the “Seek ye first” thing, we’re without a hope.